J. Britt Holbrook is Assistant Director of the Center for the Study of Interdisciplinarity and Research Assistant Professor within the Department of Philosophy and Religion Studies at the University of North Texas. Holbrook’s work since 2005 has aimed to challenge the typical distinctions between research, teaching, and service according to which faculty members are judged. Instead, he has attempted to embody the spirit of his research and achieve scholarly excellence with societal impact. He therefore pursues publication not only of peer reviewed journal articles, but also of works written for a mixed audience that includes non-academics. Written with the aim of policy-relevance in mind, his works address scholarly communications, open access, impact, peer review, and transformative research. Venues include scholarly journals, academic blogs, science policy blogs, and other publications aimed at policy makers.

Holbrook has made over 50 presentations in 9 countries around the world, again targeting a mixed audience of academic and non-academic ‘users’ of his research. Of over 10 workshops Holbrook has helped to organize, more than half have included participants from both the academic and ‘user’ communities. Holbrook has been awarded grants totaling $514,054 from the US National Science Foundation over the last 5 years. In August, 2012 Holbrook was appointed to a three-year term on the AAAS Committee on Scientific Freedom and Responsibility.

In addition to 10 years of experience teaching philosophy classes, Holbrook also has interdisciplinary teaching experience as a member of the faculty of the 2007 Texas Governor's School and as a two-time co-instructor (with biologists) of a field course in socioecological conservation in the Cape Horn Biosphere Reserve in southernmost sub-Antarctic Chile (see photo).

Holbrook's current research focuses on interdisciplinarity, peer review, and the relationship between science, technology, and society. He is especially interested in the future of scholarly research and communication and the incorporation of societal impacts considerations into the peer review process of publicly supported funding agencies (such as NSF’s Broader Impacts Criterion). He also has growing interest in China, which presents a very different policy context than the US and Europe. His most recent publications include: Peer Review, Research Integrity, and the Governance of Science – Practice, Theory, and Current Discussions, co-authored and edited with Robert Frodeman, Carl Mitcham, and Hong Xiaonan. Beijing: People’s Publishing House, 2012 and “What is interdisciplinary communication? Reflections on the very idea of disciplinary integration,” published online first in Synthese. DOI: 10.1007/s11229-012-0179-7. 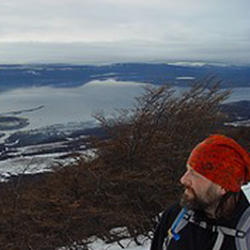